Guest bloggers, Robyn Stevens & Becca Rust, detail their experience attending a Seattle Sounders match at Starfire Sports. But not just any match, round 32 of the U.S. Open Cup—the oldest ongoing soccer competition in the U.S.

There’s something quintessentially Pacific Northwest about driving to a sporting event with the sunroof open, only to be met with a full-on downpour during the match, followed by clear, brisk night skies for overtime. Naturally, no one, from the fans to the players, were about to be deterred by a little rain. 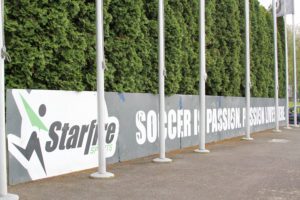 Neither of us knew much about soccer, and even less about the venue, Starfire Sports. But as soon as we arrived, fans and employees alike were all enthusiastic to share their passion with us, informing us along the way about the traditions, rules, and history that accompany the experience of a Sounders game at Starfire. There were food trucks and concessions, a live DJ, a beer garden looking out over the pitch, performances by Sound Wave (the official Sounders band), and even glimpses of some local wildlife—most notably a bunny who ran onto the pitch, disappointed to be fooled by the high-quality synthetic turf. If only he realized that five of the 12 total outdoor pitches are in fact grass, and he just happened to hop onto the wrong one.

Before the match began, we explored around the campus, learning about the various fields and all the different events they’re used for: youth teams, Sounders practice pitches, and adult indoor soccer leagues. There’s a cafe and restaurant in the athletic center, with good pizza and a variety of beers on tap. We learn that the players come out through a tunnel, where you stand close enough that you could high-five them as they make their way onto the pitch, and that here, getting an autograph from your favorite player after the game is a breeze. 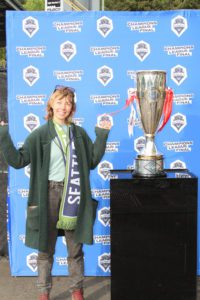 Waiting in line to pose with the recently-won CONCACAF Cup, we spoke with an old-school Sounders fan from Spanaway, Joseph Lieu, who loved Starfire games because “it’s much better and way easier to meet players than at Lumen Field. There’s more room to stand and meet and talk to the players one-on-one after the game. That’s how I met the entire team 8 years ago.” It is because of growing up going to Starfire games that Joseph is now going through school to become a sports photographer.

A group of exuberant fans boasted to us about who had traveled furthest for the event, citing Port Orchard, Silverdale, and even one as far as Burlington, who had driven over an hour and a half to watch the Sounders. Chris Matala, however, didn’t have to travel nearly as far. Chris works in Tukwila, and is a frequent visitor for Starfire. “It’s fun to see the Sounders play here, to have pros on the field because most of the time it’s kids on the field. But those kids, they have more passion than the pros, because they are trying to get to the pro level.” We asked if they had favorite places to go out after the game, and they said that with all the great options, they couldn’t pick just one. Ryan Bennett piped up; “Tukwila has a lot to offer!”

When the match finally began, the crowd grew silent, and stood ceremoniously, raising their hands wide. The players walked proudly onto the pitch in two lines, and the ritual began. Clapping in unison, the crowd rhythmically grew louder and faster. And then the players were off, electrified by the intensity of the crowd.

The Emerald City Supporters (ECS) fan club showed up in force. A quarter of the stands made sure the crowd never missed a beat with their chants and cheers. They had huge flags waving and bolstering the players tirelessly during the game. The crowd was rowdy and rambunctious like you want at a Sounders game, but remained family-friendly.

Most of these players aren’t the Sounders’ typical starting lineup. Because of the nature of this tournament, it’s a great opportunity for coaches to put in newer, or B-string, players to get more time on the pitch. Still, plenty of recognizable names were out there, including local Kelyn Rowe. Kelyn grew up playing at Starfire as a kid, and described it as “cool, nostalgic to be back” on his (truly) home turf. It’s been about five years since the Sounders last played a match at Starfire, and it’s obvious the players have missed it. Forward Fredy Montero said, “It’s always fun to play with a crowd that is close, and we can hear every single one of them screaming and having fun.” The attendance at Starfire that night was 3,773, and while that may not seem like much to a Lumen Field regular, that’s nearly a packed house for the 4,000-seat Starfire Stadium.

The Sounders opponent for the night, the San Jose Earthquakes, managed to score twice before the Sounders came back with an answer. The rain started to drizzle, and we took it as a sign. The Sounders returned again to tie it up with just a few minutes left in regulation. During the action, we had the good fortune to meet Mark Bickham, one of the founders of Starfire Sports. Mark warned us that in this tournament, there are no ties. So when at the end of the 90 minutes (plus stoppage time) the score was still 2-2, we were in for an extra two 15-minute halves. By then the rain was coming down like only Western Washington rain could, but despite the overtime and the stoppage, fans stayed glued to the game. Slide tackles became involuntary, and splashes of rain gave players little halos when they headed the ball. Where the crowd noise used to rise as a player moved toward the San Jose goal line, now the crowd was excited just to see them cross midfield. The roar of the crowd never let up, outmatched only by the periodic rumble from a passing “Sounder” train, seemingly cheering on the team in its own right. 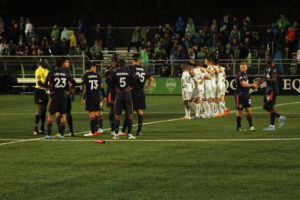 Flash-forward to the end of overtime and neither team managed to score a goal. This meant  time for penalty kicks—each team gets five penalty kicks, and whoever has more at the end takes the game. The rain had let up by this point, but the 2+ hours of play had taken their toll on the players. But their determination seemed to be in equal measure, as they ended the 10-total penalty kicks still locked in a tie.  Next stop, “sudden death.” Each team kicks, and if one gets a goal and the other misses, it’s all over. Both teams go through player after player, making every goal in perfect synchronicity. Each player can only kick once, and they do. After 10 players from each team have taken their kicks, the Sounders and San Jose Quakes have each only missed one, two and a half hours after they took the field, at 9-9. The last players to attempt the kick are the goalies; who previously had been trading off guarding the net, now turn to face one another. The Sounders keeper, Stefan Cleveland, shot first. Unfortunately, unable to make the switch from saving to scoring, his kick was low and the San Jose goalkeeper Matt Bersano dived on the ball and made the save. Then they switched, Bersano squaring off against Cleveland. The crowd inhaled together.

Bersano scored, ending the brutal shoot-out. Had Cleveland saved it, we would have continued penalty kicks, starting back at the top of the lineup. It was a disappointing end, though one could not have asked for a more exciting or intense game. Nevertheless, the crowd cheered for the Sounders’ tough battle, confident that all players had left everything they had on the pitch that night.

Afterwards, we joined in on the post-game press conference. Sounders Coach Brian Schmetzer was proud of how well his team played throughout the match, despite the final score. Asked how he felt being back at Starfire, he instantly replied: “Loved it. Loved it. Ya know, when we scored the first goal you could just sense the crowd, there was a little bit of rain […] I loved it. I thought it was great.” Also, he was asked how many times he’d experienced a shootout that long in his career, to which he said:
“Never. Never.”